There is a man I know, named Jack Stecher. Some know him as an anesthesiologist, I call him my friend and at one time he was my doula. Many don't know that at my post partum visit for my last son my cervix had some worrisome spots that needed to be removed asap. I was worried about general anesthesia, since I was nursing a baby, so I called Dr. Stecher. He assured me he would meet me at the surgery center no matter what,  but thought maybe an epidural might be better. I was thrilled at the idea. Excited about not being under general and getting to experience a epidural by the best. I had not had an epidural for any of my 5 deliveries, but welcomed the idea in this circumstance.
An hour or so later my phone rang, it was Dr. Stecher. He recommended that I bypass the epidural and instead just get a cervical block, administered by my OBGYN. "Is that possible", I said?
He said, of course, you've given birth to 5 children naturally...I think you can handle a 20 minute procedure. He said he would ok it with my OBGYN.
The next day when I showed up at the surgery center, there was Dr. Stecher waiting for me...my heart stopped because I thought since he was there my doctor had not agreed to the local and I would instead need general. I said to him, are you here to do my anesthesia after all? He said, NO, I am here to be your doula. I would never let you do this alone......
He stayed for the entire procedure. He held my hand and talked me through every minute. And when it was over he stuck around recovery until my family could join me.
I have seen this man at work. I have seen him care for and calm many women and I consider myself lucky to know him and witness his heart and hand at work. 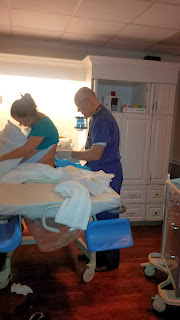 Dr. Stecher has always been a supporter of Doulas. Actually, when I worked at Baylor as an educator, he would never leave my class without giving a doula 'commercial'.  I have heard him speak so many times about how an epidural is done, why a mom might need him, and what the side effects are. He is such a treasure at Baylor, and I wish every doula could learn what an important role he can have on the birth team when needed.
There are few men like him in this world. Men who share sacred space with a woman, in one of  her most vulnerable times. He is a man who walks softly in that space, speaks kindly, and never judges. He knows she may have hoped to have a medication free birth,  or maybe she is many hours into an induction, or maybe she is just afraid of what's to come....whatever the reason he has been requested at her side, he makes her feel comfortable and at ease.
Over the years, I have seen him do many epidurals and heard him educate and empower women in his own right....I feel very fortunate to be one of those women and will never forget his authentic kindness and true friendship.
As a doula, I am often hired to help avoid an epidural....but I think it's important to share the heart of one, Jack Stecher, who just so happens to share my same philosophy about pain vs. suffering and the innate and ever impressive power of women.

Posted by Dallas Doula at 6:17 PM No comments: